Nineteen years ago the City of Angels erupted in flames and disorder.
Are we all getting along now?

Just Another Day At The Office

Was briefly detained today by L.A. County Sheriffs, while on assignment for the L.A. Weekly.
I was shooting the Men's L.A.County jailhouse building from the sidewalk and was stopped by sheriff deputies. I was searched for weapons and was run through their computer system. They told me that the jail is private property, and there are national security concerns about photographing the facility. I told them I was a news media photographer working on a up coming story for the L.A. Weekly newspaper.
Was able to turn on the video function of my Canon 5D Mark II about 3 minutes in to the stop. One deputy removed the camera from around my neck, and placed it on the back of his squad car.
After a total of six deputies check me out, my camera was returned to me and I was released to continue my assignment. Actually snapped one image of them as I walked away.
Although the deputies were polite and professional, it seemed highly unnecessary for a total of 6 deputies to harras a working media photographer for shooting exteriors of a public building from a sidewalk.

Email ThisBlogThis!Share to TwitterShare to FacebookShare to Pinterest
Labels: LASD 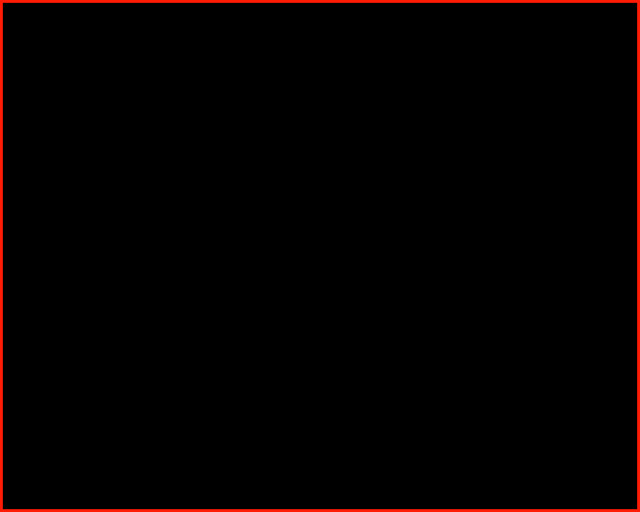 Austin Beutner is now the first real candidate for mayor of Los Angeles. Former mayor of L.A. Richard Riordan was on hand to endorse Beutner at a local L.A. business, Pear Garden Produce.
Beutner promised "jobs jobs jobs" will be his campaign's focus.
The election for mayor is nearly two years away.

"Bady" a very large Airport Police bomb sniffing dog was a little more than upset at having his photo taken today at a press conference held at the LAX Theme Bldg.
After barking and lunging at me a couple of times, L.A. Mayor Antonio Villaraigosa stepped in and calmed "Bady" down.
Thank you again, Mr. Mayor.

Iconic fashion designer, known simply as Bijan, has passed away last Saturday from complications due to a stroke.
Bijan's Rodeo Drive store was known as "the most expensive store in the world." and was only open by appointment.
His client list included President Barack Obama, Gov. Arnold Schwarzenneger, Tom Cruise, UK Prime Minister Tony Blair, President Ronald Reagan, and hundreds of other notable people.
Several of Bijan's collectable custom cars would often be seen parked in front of his store, including his million dollar Bugatti Veyron painted with his logo on the hood.

Email ThisBlogThis!Share to TwitterShare to FacebookShare to Pinterest
Labels: Bijan

LAPD and Dodger officials enact new hi-profile security measures at the stadium in the wake of the beating of Brian Stow, a Giants fan. Hundreds of LAPD officers are now stationed at the stadium during home games on foot, horseback, motorcycles, bicycles, and various other vehicles.

New temporary lighting will be employed at the stadiums parking lots during night games. License plate readers will also be installed at the entrances of the parking lots.

Former LAPD Chief William Bratton, now Chairman of Kroll a private security firm located in New York, was hired by the Dodgers to help employ new and better security at the stadium.
Photos by Ted Soqui © 2011

Email ThisBlogThis!Share to TwitterShare to FacebookShare to Pinterest
Labels: Dodgers

Famous graffiti twins from Germany How and Nosm, along with DABSMYLA, are painting a giant graffiti piece on the Neptune building located in the arts district of L.A.
The project is part of the L.A. Freewalls Project, which features the world's best graffiti artist.
Follow all of the action at Jetsetgraffiti.com 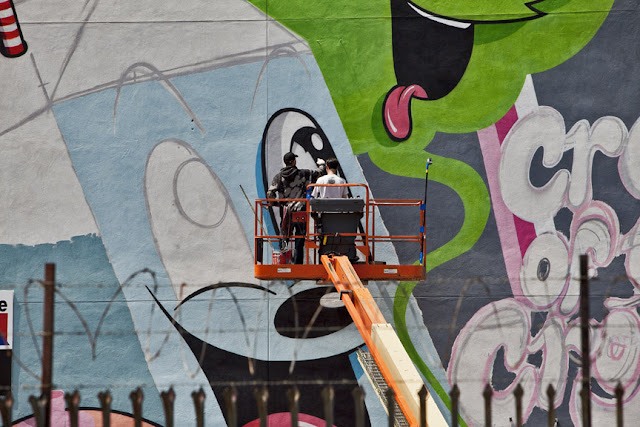 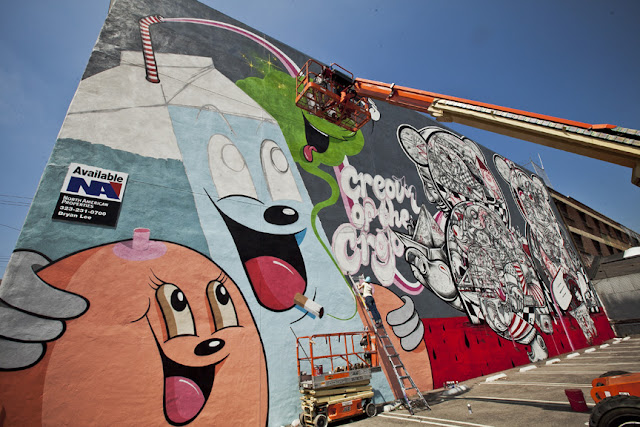 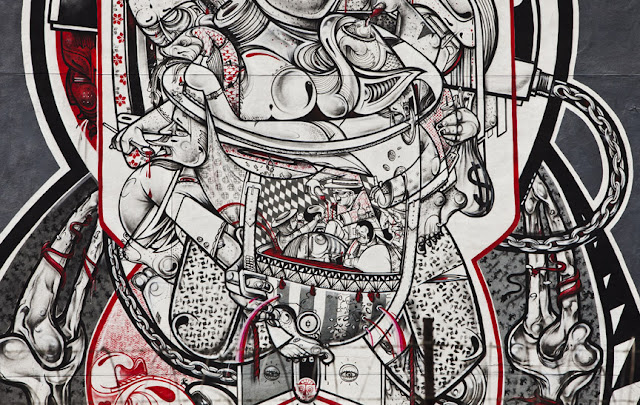 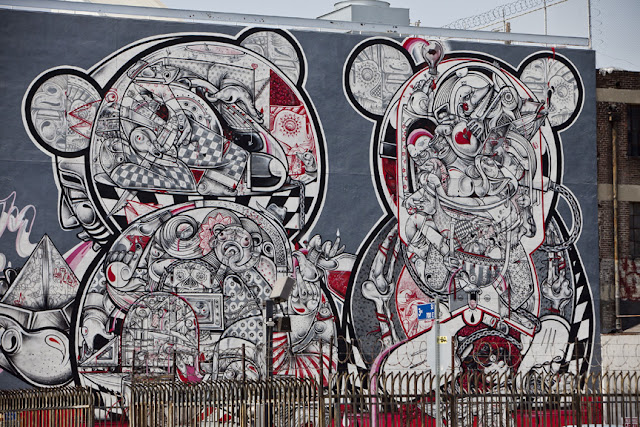 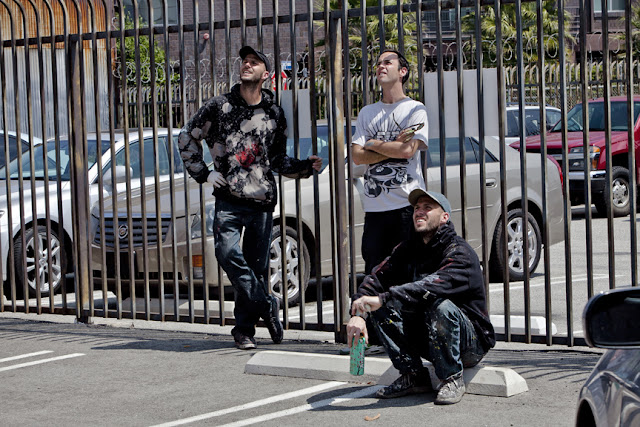 Email ThisBlogThis!Share to TwitterShare to FacebookShare to Pinterest
Labels: graffiti, How and Nosm, street art

Graffiti Removal Atop The Eagle Rock

A 14 member crew from L.A.F.D. station #88 Urban Search And Rescue grind away graffiti from the Eagle Rock located in northeast L.A. The work was deemed to dangerous for regular graffiti removal crews due to the extreme terrain of the Eagle Rock. The USAR team tethered themselves with ropes, repelled down the steep face of the rock, and grinded away at the graffiti tags with hand held power tools.
Several members of the USAR have assisted at ground zero in NYC, the Katrina disaster in New Orleans, and at the mudslide at La Conchita. This is their first graffiti removal exercise.

The Sylmar home after a day long standoff between the home owner, Sergio Salazar, and LAPD SWAT.
LAPD officers made a radio call to Salazar's home for domestic abuse. Salazar open fired on the officers and struck LAPD Officer Steven Jenkins once in the face, and once in the torso.
LAPD SWAT was called in to remove the lone suspect, they attempted to get him to leave the home via a PA system. More shots were exchanged along with tear gas, Salazar refused to leave.
LAPD SWAT then deployed their newest piece of equipment, The BatCat.
The BatCat is a giant forklift crane made by Caterpillar that can be operated by remote control, it cost $1 million dollars. It was used to claw open the Sylmar home in order to find the suspect, was was found shot dead in the upstairs bathroom.
This was the first time the BatCat was deployed.

L.A.P.D. detectives and Chief Charlie Beck hold a press conference to update the media on the "Grim Sleeper" serial murder case.
Police officials ID'd 8 women who are still missing, three of them were directly connected to evidence found inside the "Grim Sleeper's," Lonnie Franklin, home.
55 other women in Franklin's photo collection have not been ID'd, and the police are asking for the public's help in finding them.
The family of Ayellah Marshall attended the press conference, she has been missing since February 2005 and was 18 at the time.
Chief Beck also had a blue bandage on his arm. He gave blood at a blood drive held in honor of L.A.P.D. officer Steve Jenkins. Jenkins was shot on duty early this morning and is in guarded condition.

A weekend street carnival in mid-town this weekend.