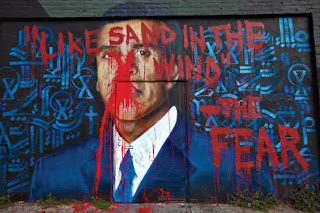 My image of a defaced mural of L.A. Mayor Antonio Villaraigosa made it on to KNBC LA4 11pm broadcast. It is part of a LA Weekly cover feature on the outgoing mayor and was written by Patrick McDonald.

Eric Garcetti celebrated his victory over Wendy Greuel for Mayor of Los Angeles. Mr. Garcetti was surrounded by his family and supporters on the stage at the Hollywood Palladium while he gave his victory speech at around 11:40pm.

Los Angeles Mayor Antonio Villaraigosa voted in Hancock Park today.
The Mayor did not disclose who he voted for in the race for the new Mayor.
Although he denied being sad leaving his job as mayor of Los Angeles, he looked and sounded so during an impromptu press conference held outside of the polling place. The Mayor also stated he was looking for a new place to live and still wasn't sure where yet.
The Mayor's final statement was a heartfelt thank you to the media photographers for their coverage of him and his office.

Found this gem in my files as well. Umbrellagate is getting out of hand.
Tea Party event held in Beverly Hills in September of 2010. Wasn't even raining either.

Was searching through my photo archives and came across this image of Roger Ebert receiving his star on the Hollywood Walk of Fame back in June of 2005.
He was very gracious about having his photo taken that day and gave me a "thumbs up."

Email ThisBlogThis!Share to TwitterShare to FacebookShare to Pinterest
Labels: Hollywood


Operation Sudden Impact solves six cold case murders, and leads to the arrest of forty gang members and associates who operated in Montebello, CA.
A large cache of assault weapons many modified to fire fully automatically, several hand guns, and a rocket launcher was also seized by the joint task force.
Operation Sudden Impact was a multi-agency effort of the ATF, Montebello PD, LA Co. Sheriff Dept, and the CA DOC, and was a two year long investigation.

Ran in to Los Angeles Mayor Antonio Villaraigosa today leaving a press conference at LAPD headquarters today. Asked him if I could take a quick photo of him. He happily obliged.

Gun buy-back program in Los Angeles press conference at LAPD headquarters.
LA Mayor Antonio Villaraigosa and LAPD Chief Charlie Beck announced that 1172 guns were turned in at 4 locations in Los Angeles. Gift cards are given in trade for the no-question buyback program. $200 for assault weapons and $100 for handguns.
One pipe-bomb was also turned in, LAPD arrested the suspect who stated that god wanted him to turn in the bomb, and not to blow up the Hollywood sign anymore.

Images from the "Springs Fire" in Ventura County near Point Magu.
The Naval Base at Point Magu also caught on fire.
The wind driven fire started in Newberry Park and travelled down to the Pacific Ocean in less than 24 hours.