A former Marlboro man, Eric Lawson 72 years old, died of respiratory failure due to COPD brought on by cigarette smoking.
Lawson in one of several Marlboro men who have died from smoking related disease.
He became an anti-smoking crusader and continued smoking until he was diagnosed with COPD, chronic obstructive pulmonary disease.

Lawson began smoking at the age of 14.

Was on assignment earlier today and saw these two LAPD motor officers. I asked which bike was better, the Harley or the Beemer? Opened up a can of worms. The Harley rider loves his bike. He told me it was super comfortable to ride and operate. He also told me it made a much cooler sound than the Beemer, and is made in the USA. The Beemer officer liked his bike better because of the superior performance. The Harley comes with air-horns, appearantly the Beemer's electronic horn isn't that loud. The Harley rider laughed how long it takes the Beemer rider to get someone to pull over.
Either way, the LAPD has decided to phase out the Harley's. So keep your ears open for the Beemers.

Email ThisBlogThis!Share to TwitterShare to FacebookShare to Pinterest
Labels: LAPD

Rapper and moviestar "Ice Cube" had his name and song title put on the Good Year blimp today.
In the song, "Good Day," Ice said "it was a good day, even saw my name on the Good Year Blimp."
The blimp flew around LA all day broadcasting the message "Ice Cube says it's a good day."
Cube, and his fans raised 25,000 dollars to benefit "A Place Called Home."
Today is also the unofficial 20 year anniversary of the song, "Good Day."
The LA Weekly slideshow.

This is the spot on the Lincoln Memorial steps in Washington, DC where the Rev. Dr. gave his famous "I Have a Dream Speech" 51 years ago.

Found this last image from the Northridge quake of '94. Was looking for quake damage photos in Hollywood and came across a giant mural, Legends of Hollywood, that slid off the wall and on to the sidewalk. The face of Hollywood star Bette Davis was almost intact, it was missing an eye due to a homeless youth trying to remove it from the plaster. He told me he wanted "Bette Davis Eyes." The youth removed the eye and quickly dropped it. He started to remove the other eye, but I made him stop so I could take the image of her face.

The 23rd annual international Los Angeles Photographic Art Exposition held it's opening and gala at the L.A. Mart this evening. Hundreds were in attendance to see some amazing photograph from the area's finest galleries.
Photo L.A. will run from this Friday through Sunday and tickets are still available from their site www.photola.com

Today marks the 20th anniversary of the Northridge earthquake on January 17, 1994. The massive quake shook me, along with most Angelenos, abruptly out of slumber in the early morning hours. Soon as the quaking stopped, I quickly dressed and grabbed my camera bag along with the last 20 rolls of film from my refrigerator. The first stop would be the campus of CalTech in Pasadena, they would have first hand knowledge of where the quake was centered and how large it was. Word came in that it was a 6.7 quake centered in Northridge, which would be my next stop. The only other live news and info on the quake would come from Pete Demetriou on KFWB News 98 on the AM frequency. Pete mentioned that there was a huge fireball exploding from Balboa ave. I finally made it there to witness the 100 foot gigantic fire ball powering through street, that was also turned in to an quick running urban river due to a massive water pipe break. The heat was so intense that I had to circumvent the fire ball and shoot upwind so I could get closer.

Word was coming in on four major areas of damage, a trailer park fire, an apartment building collapse, and two major freeway collapses. I drove to the freeway collapse at the I5 freeway at the Newhall pass since it was the closest. Driving on the 5 freeway I encountered several cars driving back on the wrong side of the freeway, almost causing several head-on accidents. I soon found out why, both the I5 and 14 collapsed on to each other like fallen giants. Time Magazine quoted me about it as saying "It looked like the fall of the Roman Empire." My film supply was also running very low, had to be super selective on what I photographed. An editor from Time Magazine called me and told me I was on assignment for them, thanks to my photo agency Sygma. A film drop was organized for later that day with the other photographers on assignment. All of our film would be hand couriered to NYC for processing an editing. Most of the other photogs turned in 100 plus rolls each, I turned in 18. Was wondering what they must have seen to turn in so much film. Turns out shooting conservatively was a plus, made my film super easy to process and edit. The other photogs shot too much film to process and edit quickly for deadline. Time Magazine ran several of my images, one was even run three pages wide as a fold-out, and once again as a double-truck in the year-end issue's lead on the "Year in Images."

It was a long strange day. I eventually ran out of color slide film, and finished the day shooting black and white film which I could process and print at home.
Here's a slideshow of images on the LA Weekly webpage.

A 3000 acre fire burned in the hills above Glendora earlier today. The "Colby Fire" was fought mostly from the air with Super Scoopers and helicopters.

Today, January 11, marks the 50 anniversary of the US Surgeon General's report linking smoking and heath. Cigarette smoking in the US has been on the down swing from 40% of the adult population to just around 18% now. Smoking causes about 440,000 deaths per year, and is the leading most preventable type of death in the US.

Back in the Day

Was going through my files looking for images, and came across my old 1989-1990 press pass from the LA Weekly.
Funny how time flies. 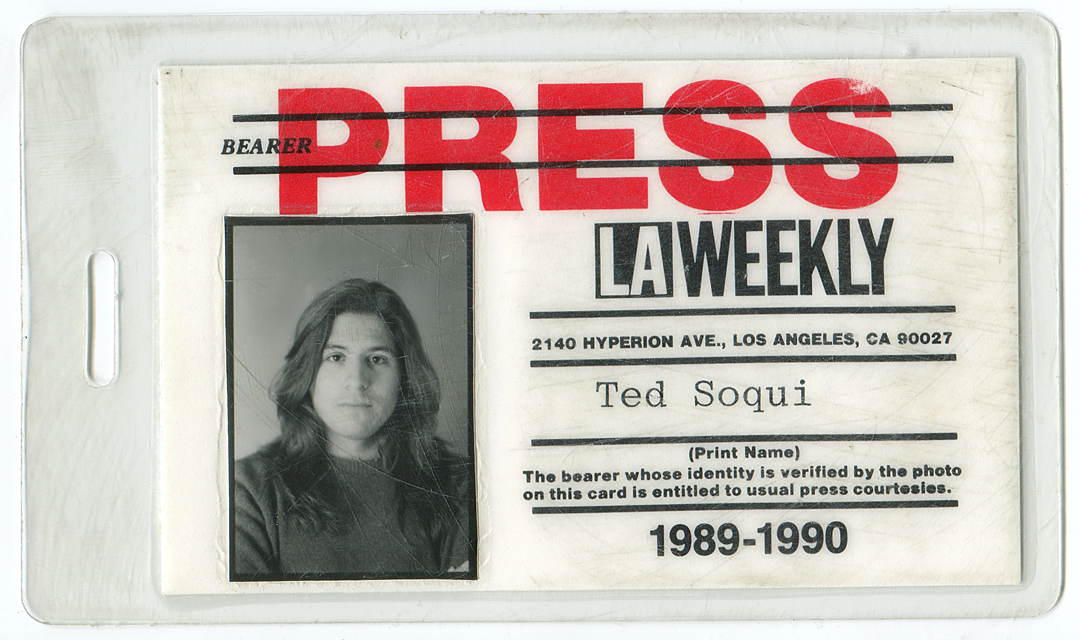 Longtime L.A. County Sheriff Leroy Baca announced his resignation today at Sheriff's headquarters in Monterey Park. He is expected to leave his post as Sheriff by month's end. Baca has served the department for 48 and leaves amid allegations of beatings and prisoner brutality in the LA jail system which the Sheriffs department oversee. The FBI has launched an investigation in to the allegations and the ACLU has filed a law suit against the department as well.
Sheriff Baca was surrounded by his command staff as he read his resignation speech, with his voice cracking in sad emotion several times.
Sheriff Baca was up for re-election this June.