The 405 freeway preparing for a 2 day closure, from July 16 and 17th, lovingly referred to as "Carmageddon" by KNX news radio. The 10 mile closure, from the 10 to the 101, is expected to wreck traffic havoc upon Los Angeles, and residents are asked to stay away from westside.
Local bars and area near the 405 are offering specials to entice residents to stay off of the roads and have a place to hang out.

Outside views of the Santa Monica apartment building where fugitive Whitey Bulger and his girlfriend Catherine Grieg were living.
The couple used the names Charles and Carol Gasko to hide their identity. They also paid the $1145 dollar rent in cash every month, and lived there since 1996.
The FBI found $800K cash along with 30 firearms inside the apartment. Whitey Bulger and Catherine Grieg are now in federal custody back in Boston.

A federal judge in L.A. ruled in favor of the U.S. governments efforts to sieze the trademarks of the Mongols motorcycle club. The Mongols were involved in racketeering, drug trafficking, hate crimes against blacks, fire arms violations and assaults.
In 2008 the ATF and FBI arrested 61 Mongol members, under "Operation Black Rain," and shut down their operations. As part of the indictment against the Mongols, the Justice Department seized the Mongols intellectual property including their logo. Wearing or displaying a Mongols logo or "colors", a Ghengis Khan character riding a chopper, would now be illegal.
The Mongols formed in the L.A. area in the early 1970's and are mostly comprised of latino members.

Email ThisBlogThis!Share to TwitterShare to FacebookShare to Pinterest
Labels: Mongols

Saw this cool looking horse back rider on the Rio Hondo trail, while I was riding my bicycle. 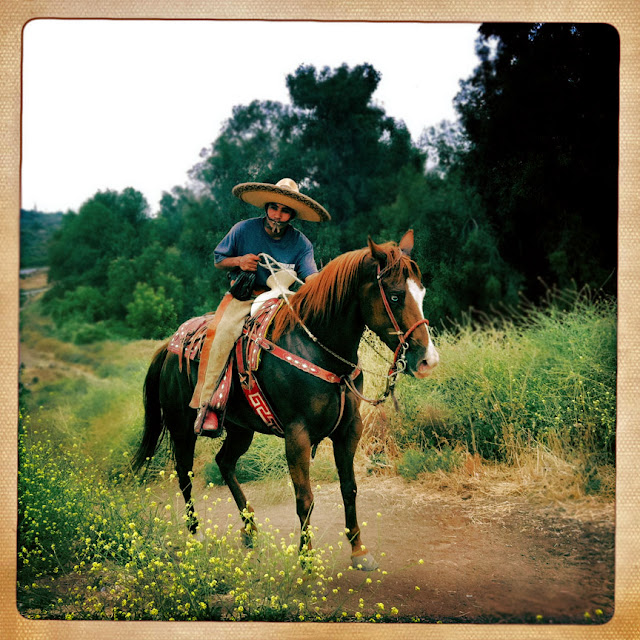 Alan Kimble Fahey, creator of Phonehenge West, was taken into jail by order of a L.A. County Superior Court Judge today. Fahey was convicted last month of 12 misdemeanors including building code violations for building un-permitted and un-safe structures on his property. He also failed to comply with court orders to stop all work on his property and turn off the power after the convictions. Prosecutors argued that Fahey was ignoring the law and acted as he was above the law. Supporters of Fahey felt the court acted too harshly, and believe the one-of-a kind structure's mechanical issues could be resolved.
A bail hearing is set for July 27.

The creator of "Phonehenge West," Alan Kimble Fahey, was convicted of three misdemeanors today, for not complying with the building and safety codes of Acton, CA., a small desert community just north of Los Angeles.
Fahey was repeatedly cited over the last few years by Acton building and safety officials to cease construction of his massive structures, many of them considered unsafe by the officials.
The "Phonegenge West" compound has taken Fahey over 30 years to construct on his sprawling 20,000 foot California desert property. Fahey is now facing prison time along with fines for the misdemeanor convictions, and the structures may have to be torn down. Supporters of the "Phonehenge West" project believe the buildings should be saved, and consider them works of art. Most of the structures are constructed with telephone poles and other strange industrial materials.
Prosectors in the case may file more charges against Fahey,  he will be sentenced on July 8, 2011.

A seven mile section of Angeles Crest Highway re-opened to the pubic today, after a 18 month closure due to heavy rain and damage from the Station Fire.
Took a drive up and down the newly repaved section today and shot this video.

Former presidential and vice-presidential candidate John Edwards was indicted today for federal campaign charges today by a Federal Grand Jury. Edwards was charged with 6 counts of conspiracy, receiving illegal campaign contributions, and making false statements. The case was tied in with a sex scandal involving Edwards, his campaign manager attempted to cover it up with campaign money.
Edwards is expected to plead not guilty.

A decent sized and rare springtime south swell is hitting the beaches of L.A. County this week, producing some fine waves. Hundreds of surfers took to the water from Will Rogers to Point Dume. The swell is expected to last till late Thursday, and a deep marine layer should also hit the coast tomorrow according to KCBS weathercaster Jackie Johnson.